Meet Our Members of the Month Steve Donley & Mike Shelafoe 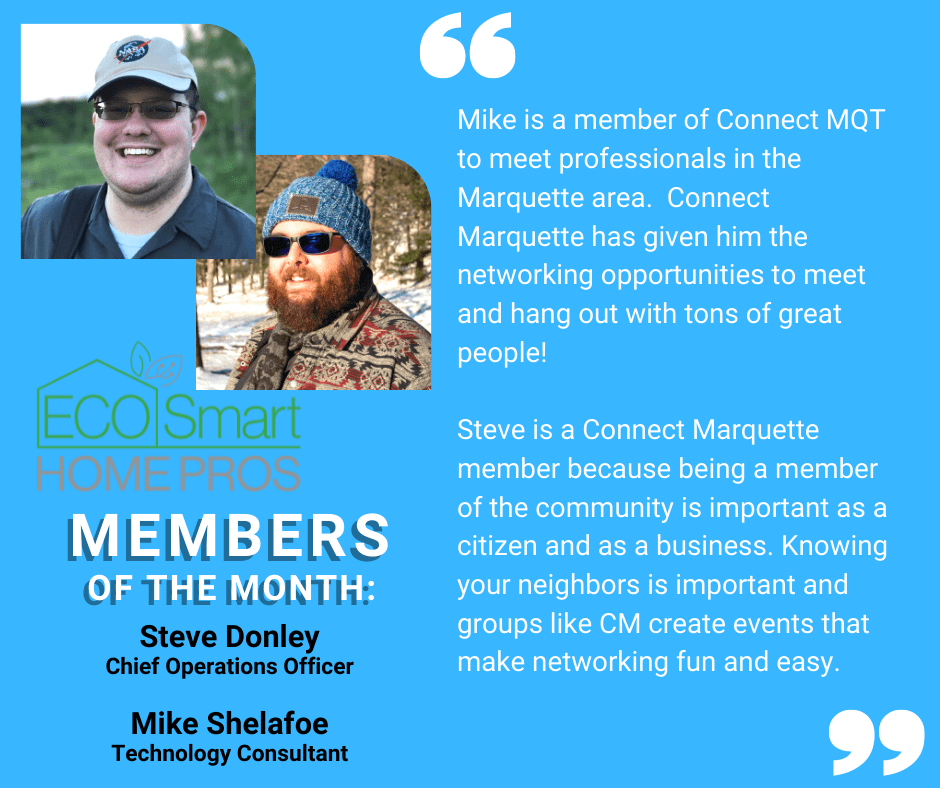 For March we’re doing a double feature to highlight Steve Donley and Mike Shelafoe of Eco Smart Home Pros as our Members of the Month. Steve works as COO of Eco Smart Home Pros making sure that his team has the tools to be the best they can be while also driving high levels of customer satisfaction and Mike is a Technology Consultant for the company.

Both Mike and Steve said they’re part of Connect Marquette to meet other Professionals in the area. Steven went on to say that knowing your neighbors is important and groups like Connect Marquette create events that make networking fun and easy!

When said “What do you enjoy connecting on?” Mike said:

Video games are always fun to talk about, but technology is also a huge passion of mine.

I enjoy connecting with people on technology, economic development, sustainability, and general business. Getting to know these thoughts help me to understand the areas where I work and how I can best assist on a larger economic scale. It’s especially great when someone truly loves the work that they do, seeing someone be passionate about their work is one of the best things in the world.

Have something in common with our Members of the Month?

Talking about their favorite hobbies, Mike mentioned video games, playing D&D, and riding and working on his motorcycle. For Steven his hobbies outside of working including attending to comic conventions, traveling to expand his understanding the world, and video games. They’re both fun loving nerds at heart which is likely why they chose technology is their profession! Steve said, “My dream project is to build a Tony Stark like home; where technology is everywhere and you can control the entire place with your voice. ”

Mike loves all of the festivals throughout the summer and fall in Marquette, especially the Fresh Coast Film Festival! For Steve, it’s all about NMU’s Campus Cinema. He was treasurer of the group for two years during his time there as a student. He also follows EcoReps and the discussions and initiatives that they are doing. His favorite local events include the U.P. Fall Beer Festival and Ore Dock’s Angry Bear Festival. He also a fan of the amazing restaurants in town, and loves Restaurant Week!

Need a lunch recommendation? Here’s theirs:

Mike says hit up Main Street Pizza or any of the local pasty places!

Some of Steve’s favorites include Smelted, Border Grill (Dat Queso!), the crêpes and coffee at Contrast Coffee, and the whitefish from Iron Bay!